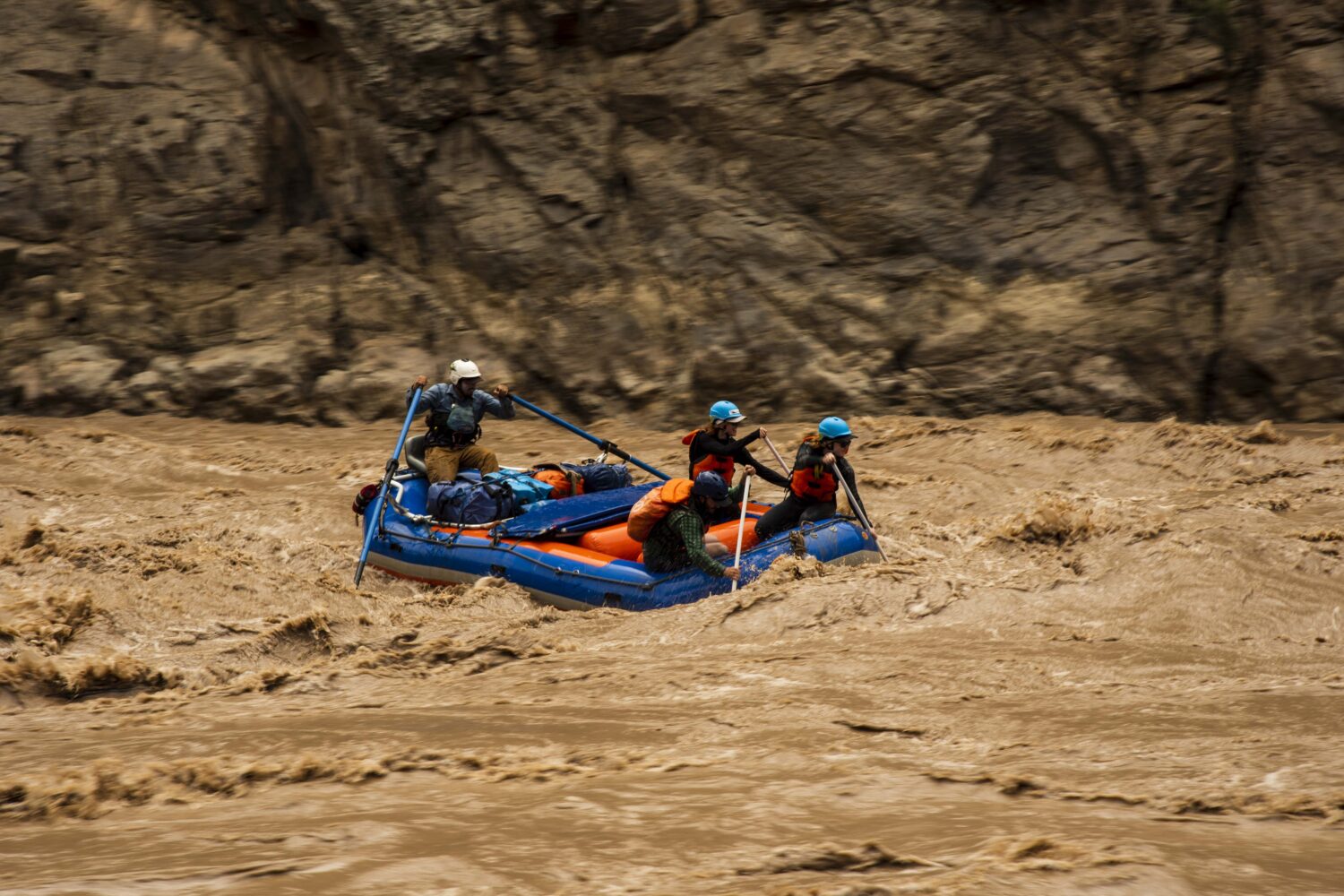 We get asked this question a LOT! And it’s not a particularly easy one to answer, this is because the Marañón is such a long river with sections of varying difficulty and it has such huge variations in water levels between wet and dry seasons.

So. What is the best season to come rafting and kayaking on Rio Marañón – Grand Canyon of South America? When do you get the best water levels on the Marañón?
Well- it all depends what you are after…

The best time to come whitewater rafting on Rio Marañón is between late May and early November. This is when levels are predictable and the weather is perfect. This is what we call the Dry Season in the Marañon Valley.

You will have sunny days almost every day and warm temperatures both day and night, with very low chance of rain.
It’s a reliably awesome water level, with dream weather. You cannot go wrong in the dry season.

For info on temperatures on the river in the dry season, see here.

What about the Shoulder Season? Can we run the river in the wet season?

We have run some of our most memorable and delightful trips in shoulder seasons.

Mid April and May:

Expect higher water levels, with likely fluctuations while you are on the river. The Marañón will probably be running brown and probably somewhere between 200-600cms.
Many smaller rapids wash out, and big rapids can get bigger. Character is big water with some huge waves and huge holes. Still pools begin to flow a lot faster, different camp options are available compared to low-water season.
It is much more likely you will get some days of rain, as this is still considered the wet season. Storms are possible.
We don’t recommend running the Upper sections of the Marañón in this period.

This can either be the end of the low water season, or the beginning of the high water season. It’s a roll of the dice.
You might get the river at a low level – around 100 CMS, or you could find the river at at what we’d consider a very high level, and this may change throughout your trip.  It’s possible to get some days of rain, and the weather is not predictable like in the dry season. It is southern hemisphere summer and the temperature is generally warm and humid. There is possibility of thunderstorms which bring strong winds and rain without much warning.

We don’t recommend running the Upper sections of the Marañón in this period, but the lower half of the river can still be run by groups who plan accordingly in terms of equipment and group experience.

If very high-water occurs, you may need wait a day or two until rising waters pass. Don’t worry though, the faster flows mean you can make up time and probably still stay on schedule to make it out of the canyon on time.

It’s very possible the river will be too high to run, and may take several days or weeks for high-water to retreat to a runnable level. It may possible to run the river through this period, but that is for experts only.

Scheduling for the Upper Sections of the Marañón Canyon

For a full descent of the River (usually 24-28 days), you need to pass through the crux known as Wasson’s Landslide and several other challenging class IV-V rapids in the ‘inner canyon”, upstream (south) of Chagual. These crux rapids involves lining rafts and running some challenging sections which become un-portageable.

To pass Wasson’s we recommend a level below 300cms (Balsas gauge).

The earliest we’d recommend scheduling to pass Wasson’s is the beginning of June. This means you could plan to start your full river trip around the 20th of May to arrive there by the end of the month, but the weather is unpredictable.

The Latest we’d recommend aiming to pass Wasson’s is in November,. However some years the river might not come up until late December or January, meaning you could potentially do a full descent over christmas- if you’re lucky. This time of year (late October onwards) can be unpredictable and the river can come up quickly meaning you might decide to change plans and put-in lower down, such as at Chagual, or re-schedule the trip based on weather patterns close to the date.

Marañón Experience are the experts in travel down the Marañón River. We love this place and look forward to sharing it with you! View all posts by MaranonEx

Enquire for more info, let us help you create the perfect Marañón Experience!

Marañón Experience will take you rafting or kayaking down the Marañón River and help you with any travel in Northern Peru. Contact us for any of your travel needs and we will be happy to help, whether this is one of our standard 9 day river rafting journeys, or a custom expedition up to 30 days in length. There are over 500km of raftable rapids on the Marañón River making it one of the greatest rafting destinations on planet earth.

We truly care about the place in which we operate, and this is reflected through all our operations. From our work conserving and protecting the river, through to coordinating with communities to realise their dreams for rafting tourism on the Marañón River.